Composing this poem was singularly cathartic. This was an attempt to capture those moments of vexation and frustration, which result from overthinking… And which other language is more apt than German to arrest such strong emotions? This I could not have achieved in any other languageI speak…

This is the imaged version of the same poem. Thank you very much clipart!

My latest creation is  a product of the current situation. How  the human life is sustained by  technology  … Not even the simplest living person can deny its  inevitable  presence…

The sovereign Mistress refers to Goddess Saraswathi- the Godess of All Art- Knowledge and Wisdom.Being in the field myself, I couldn’t possibly write on  this topic by bypassing  the immensely important influence  the media plays in the field of education these days…

Hope you  enjoy the same as much as I did writing it.

The title says it all… Anybody who has experienced/ is experiencing  fear for over a period of time will understand(hopefully) what I am talking about… It grips you bit by bit  and arrests your momentum,  manipulates your thought processes  and  leaves you incapacitated …. A sensitive  mind is constantly and totally aware of these processes… And that  makes  the whole thing all the more painful.

The setting  I have explained…. The season is winter… More than that a poet is not allowed to reveal…

I have used clipart image of a drop of water instead of just writing the word down… Needed a change and wanted to experiment:-)

This poem is  the product of my efforts to still my thoughts…The more I try stop thinking, the more persistently they pop up in my head. Gone are the days , for me, of writing longer poems… Almost all of my till now written ones belong to the shorter side of verses, for that matter… Less is more…

This creation is inspired by the Nakshatrasutras presented in the Video series on Vedic Astrology- ‘ Life Lessons from the Vedic Stars’ by Mr. Vic Di Cara . These Sutras contain only six words,  and in each of these multiple layers of meanings are hidden. I am not in a position to say whether all sutras have the same form…

Here is one such link:

Since my creative interests had taken another course in the last year. I had taken a break from writing poetry. However, surprise hit me as I now realise that it has been more than a year since I last ransacked my brain to kick open my rusty tool box… Interestingly,  the experiences with my new-found hobby- Video editing has led to the creation of this-these poems.  It is a playful attempt to capture and romanticize the process, the fun and perhaps the tediousness of the same.In short, this is a love poem to myself in creation…:-)

I had thought of writing a Haiku initially, but later I felt that that form would be too restricting for my content… The two versions are the results of my inability to select  the better version of the two- In the first version, the imagery is of the  hands searching for things in a bag , where as the second one is an attempt to simulate an image of somebody angling on a lake shore…. 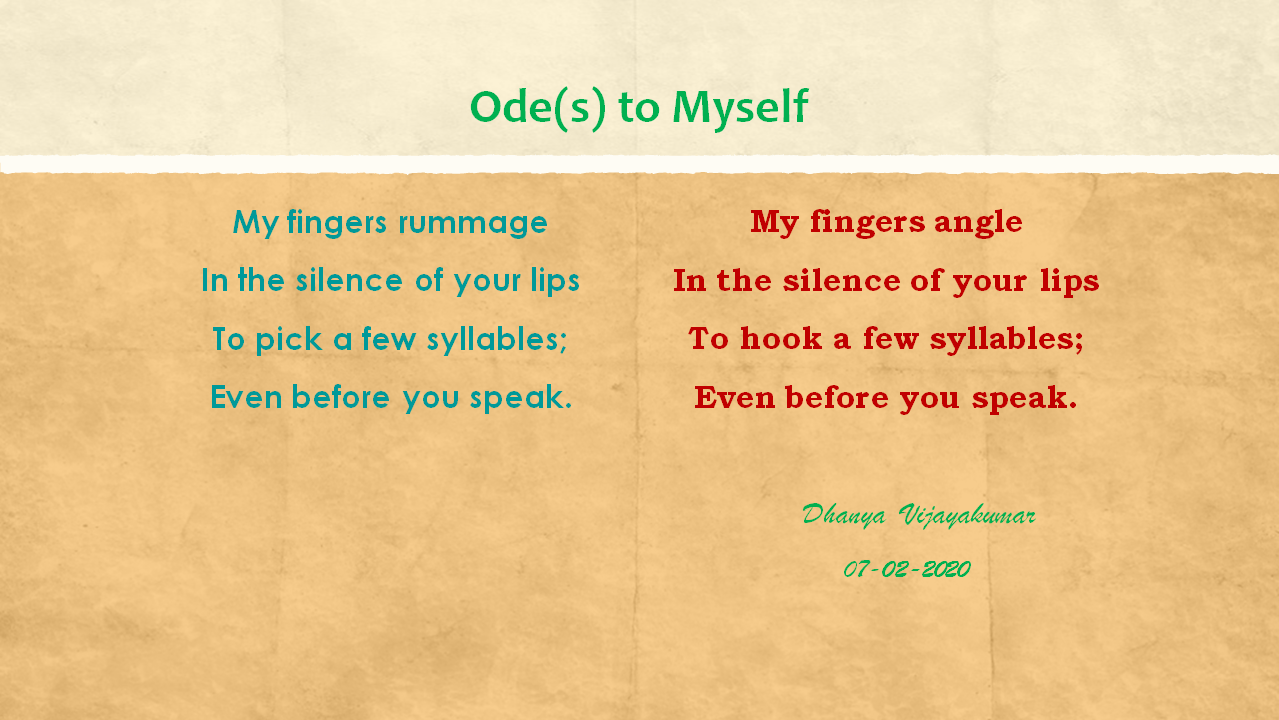 My this poem is the result of a scene I witnessed as I was waiting for a  return bus after work. A man totally intoxicated was sitting on the road side( with his bottle beside) and was raving. .. Although this sort of a scene is not very uncommon , it captivated my attention due to another’s presence…  that of a a  black dog’s.  As I saw it watching the man’s behaviour calmly( The man was  talking to the dog too…), I felt myself wondering: Who was here the actual “animal”…